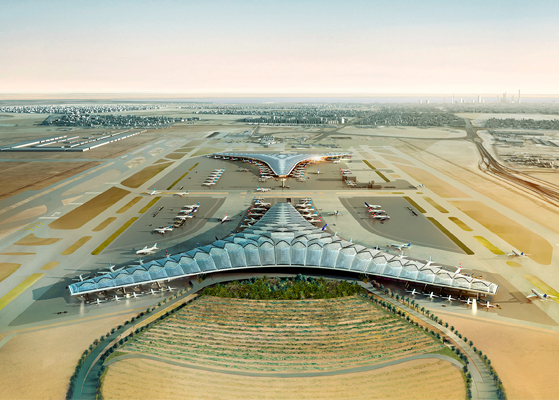 Kuwait International Airport Passenger Terminal 2, is a 13 million passenger per annum terminal, designed by Foster and Partners in association with Gulf Consult. The terminal has a trefoil plan, comprising three symmetrical wings of departure gates. Each façade spans 1.2 kilometres and all extend from a dramatic 25-metre-high central space. The terminal balances the enclosure of this vast area with a design that is highly legible at a human scale – for simplic-ity and ease of use there are few level changes. To further aid orientation, the building is planned under a single roof canopy, punctuated by glazed openings that filter daylight, while deflecting direct solar radiation. The canopy extends to shade a generous entrance plaza and is supported by tapering concrete columns – their fluid, organic forms draw inspiration from the contrast between the solidity of the stone and the shape and movement of Kuwait’s traditional dhow sailing boats. Targeting LEED ‘gold’, it aims to be the first passenger terminal in the world to attain this level of environmental accreditation and combines the thermal properties of the concrete structure with a large expanse of roof-mounted photovoltaic panels to harvest solar energy. COURTESY OF FOSTER AND PARTNERS and GULF CONSULTANTS