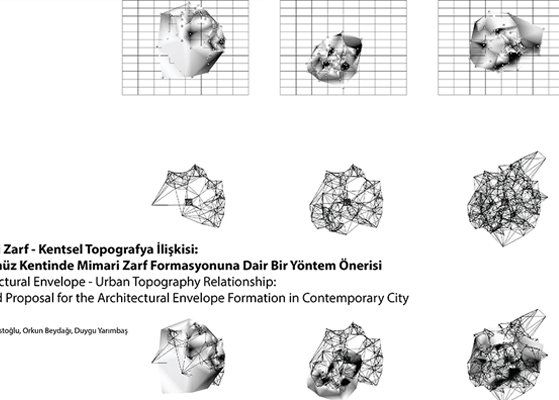 This paper aims to problematize the link between the contemporary city and the architectural envelope, described as the surface of relationship between the building and the city. Firstly, notions of “boundary” and “border”, as defined by Richard Sennett (2008), will be analyzed; and the fact that the envelope should be considered as an entity beyond a surface of separation of two extremities, but which can work as an area of relationship, will be underlined. The instability of these extremity conditions will be reminded. Users, inhabitants of the city can transform the border/boundary conditions in question, with the help of the new communication and transportation infrastructures and activities of the users are similar to the forces which have an impact on the architectural envelope, represented with vectors. The network of forces along with the envelopes under their influence create areas, which interact with each other on an upper scale, while forming the city with a fractal structure. Contemporary city is introduced as a multi-centered network, where the movement is more and more important.

The city is a territory covered with a network of forces coinciding with the user activities, where the user continuously stores the information. Both increasing prevalence and versatility of communication and transportation infrastructures, as well as redefining of the relationship between information and city, are important for evaluating the user’s impact on the city. Contemporary city, manifested as a transforming topography under the inluence of the user, points at a crisis of the architectural envelope within the historical perspective. This crisis is caused by the inability of the architectural envelope, considered as a static, constant entity, to continue the dynamic and transforming urban topography and be linked with it. In order to solve this situation, first, architectural envelope’s geometry has to be redefined through movement, instead of static data such as the number of edges or the sum of interior/exterior angles. This understanding will trigger the consideration of the architectural envelope as a surface of relationship, a “fold”, more than a separation, where interior and exterior, material and immaterial merges.

The final part of the paper consists of the presentation of a method for preventing the disconnection between the redefined architectural envelope and the urban topography. In this context, the impact of the user activity on the envelope will be simulated as a network of forces and the change on the envelope surface with a parametrized permeability, will be analyzed. The aim is not to design an architectural envelope produced for a specific time and location, but to obtain a system which will be re-formed in different shapes, within different conditions. It is thought that such a design method will ensure the continuity between the urban topography and the envelope geometry, in such a way to link the architectural envelope with the contemporary city.